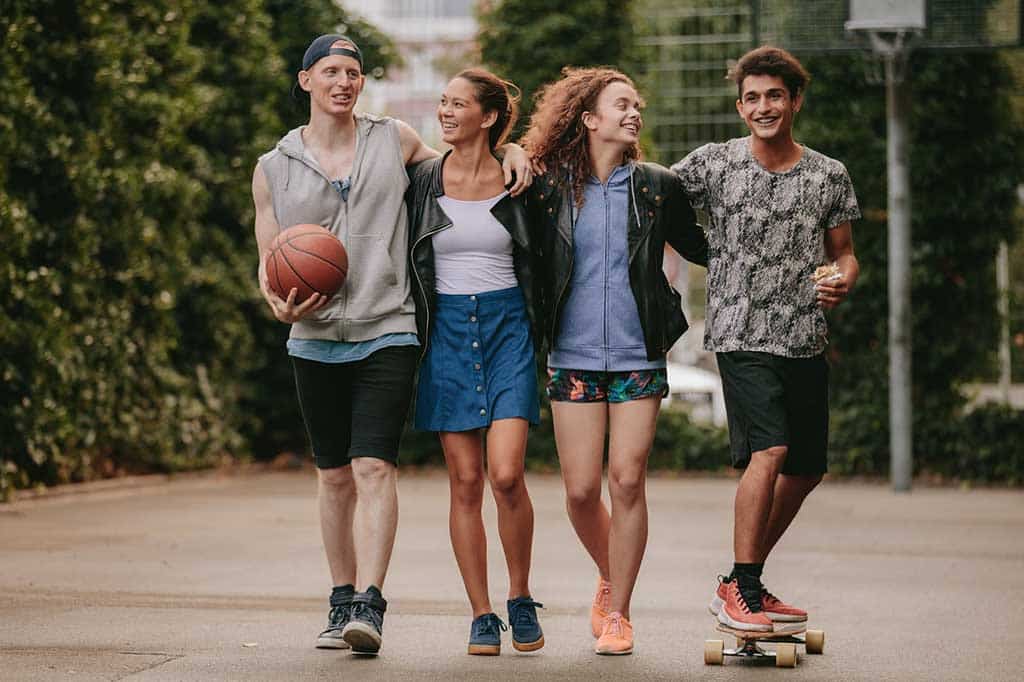 Ever since your son/daughter was little, you’ve been doing your best to protect them from the dangers of the world and equip them for it. Unfortunately, the world is so much different than it was when you were a kid, and so many parents are asking the question, “How do I parent my teenager in today’s society?”

Society has a profound impact on human behavior and thinking, but this is especially true for the developing mind of the teenager. The brain is inherently malleable, meaning that what we input has a great impact on what we output. The teenage brain is not only malleable, but is trying to understand and make meaning of the world and the individual’s place in it.

It is estimated that 75% of all mental health disorders are established by the age of 18. Because of this staggering statistic, it is essential for parents and teens alike to be aware of the negative stimuli and implicit absorption of cultural messages that contribute to unintended consequences for young people’s emotional and mental health.

Before we address how society affects the behaviors and attitudes of teenagers, we must first define “society.”

Merriam Webster defines society as, “a community, nation, or broad grouping of people having common traditions, institutions, and collective activities and interests.”

For our purposes here, “society” entails components of the world that impact one’s concept of self, understanding of right and wrong, and perception of and engagement with humankind.

The Impact of Social Media

There’s no question about it: social media has permeated every aspect of human life, for teenagers and adults alike. Unfortunately, because teenagers are more susceptible to absorbing the messages they hear from peers, celebrities, and anyone who is perceived as “popular,” social media has quickly become a trap for comparison and inauthentic presentations of self.

Parents are concerned about loneliness, positive self-image, bullying, and reports of rising depression and anxiety. Needless to say, this conversation is a timely one.

Let’s pause for a quick definition.

For all intents and purposes, “social media” is to be understood, for the sake of this article and the current circulating conversation, as a conglomeration of social platforms and applications commonly used for connection and engagement. More specifically, “social media” is to represent Snapchat, YouTube, Instagram, Facebook, Twitter, and the recently popular TikTok.

This same study reports that Facebook is no longer the dominant social media platform being engaged with by young people. YouTube, Snapchat, and Instagram have surpassed Facebook usage by a long shot. However, most recently, TikTok (a video sharing platform) has made a splash on the social media scene and it’s quickly gaining momentum. This can feel disconcerting to parents, as these newer platforms are not what most adults are comfortable navigating.

Teenagers are far from unaware of the impact of social media in their daily lives. The aforementioned study quotes teens expressing various perspectives on social media’s effects. We’ve included a few below:

Teen minds are acknowledging and foreseeing the potential negative impact of the inundation and pervasiveness of social media. But this is the world they live in, and many are seeing the effects on mental health manifest. Psychologists are concerned about the fallout of social media (deemed a “double-edged sword”) use, namely: personal and social development.

Studies on the link between social media and mental health disorders have not been conclusive, but “meaningful relationship” between social media use and depression, addiction, impaired sleep, and sedentary behavior have been reported. What does this mean, exactly? Your teen’s increased reliance on Snapchat, Instagram, YouTube, and other social media platforms may result in sadness, addictive tendencies, mental fatigue, and—let’s be honest—laziness.

At this point, you might be in need of some good news. The American Academy of Pediatrics released a report that deems social media use a proponent of connection, support, and strengthened friendship bonding, which can mitigate social isolation and loneliness.

The most important takeaway for parents seeking to understand the impact of social media on their teenager’s well-being is that the effects are multifaceted. The most recent data suggests that adolescent relationships with social media platforms are based on: time spent, activity, investment, and addiction.

If you are concerned about the behaviors and attitudes exhibited by your teenager as a result of social media use, seek to have a non-threatening, open-ended conversation with them. Maintain a judgment-free approach and ask questions to better understand their perspective. Social media use can either be divisive or an opportunity for connection with your teen.

The Impact of Sexualized Entertainment

Let’s face it, your teen knows more about human sexuality from movies and Netflix shows than from the sex education class they are required to take in high school, or from conversations around the dinner table.

They probably know more about sex and sexuality as a teenager in 2020 than you did at their age. Why is this? Entertainment and media have normalized and fantasized sex in a way most parents can’t seem to keep up with.

What does this mean for your teen? The messages they are receiving about sex and sexuality from entertainment media consumption are directly impacting their sexual beliefs and concepts and, therefore, sexual behaviors.

Interestingly, research suggests that sexualized media has a greater effect on male adolescents than any other category. Additionally, a growing body of literature reports that exposure to sexually explicit and violent media may be risk factors for dating violence and sexual violence. This means that teenagers engaged in negative sexual messaging may be more apt to engage in risky, harmful, and violent sexual behaviors.

If you are unsure of how to navigate conversations about what your teen is intaking from entertainment media about sex and sexuality, follow these links for some resources we respect: Talk with Teens About Sex and #TalkingIsPower.

The Impact of Polarized Politics

Whether or not your teen is explicitly verbal about their opinions on the ever-increasing political divide in American society, they are without-a-doubt feeling the tension. More than previous generations, today’s teens are engaging in the political climate.

Teens are paying attention to the political conversation, thanks to social media and easily accessible news (thanks to Twitter, Facebook, and even Instagram). And because of this growing political knowledge, there is a subsequent outcry of what teenagers expect from their political system.

Newsweek published an article in 2016 stating: “Two-thirds of teens (68 percent)… believe the United States is on the wrong track, and 59 percent think pop culture keeps the country from talking about the news that really matters.”

This is profound, in light of what we know of teen social media use. While they are engaged in “pop culture,” there is a growing distaste for the seeming distraction from real-life issues it produces.

Most crucially, today’s teenagers are hyper-aware of the racial tension in the United States. The 2016 article continues: “The most compelling findings show that race and discrimination are crucial issues for teens today.”

American teenagers are not oblivious to the racial tension in their nation, and they’re making their opinions known. The current political narrative has a noteworthy impact on teen behaviors and attitudes, especially in their online presence and platforms. Your teenager is more than likely making statements on social media and in conversation with friends about the tensions facing society in the United States, whether or not they voice them to you.

The aforementioned Psychology Today article continues in this vein by challenging parents (and adults at large): “With the heightened political tension in the U.S., now is the time to start asking questions about how politics affect the way teens think, feel, and engage in the political system.”

Don’t miss the opportunity to engage in political conversations with your teenager.

If you are concerned about your teen’s behavior, attitude, or mental health, you don’t have to navigate the conversation alone. Fire Mountain is committed to offering resources, partnering with parents, and coming alongside troubled teens to help them find their path.

Raising a teen in today’s society is no small feat. Social media, sexualized entertainment, and political tensions can have an overwhelming impact on your teenager’s behaviors and attitudes. Reach out today for support!